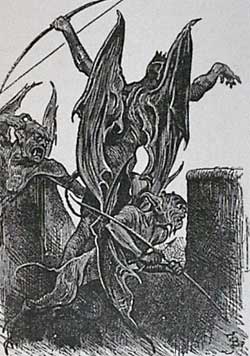 Beelzebub in the Gospels

“Beelzebub and them that are with him shoot arrows.” – Illustration from Pilgrim’s Progress – John Bunyan

Ba’al-zebub, also called Beelzebub or Beelzebul is known as the ‘prince ofdemons’. In the Synoptic Gospels (Matthew, Mark and Luke), it’s who the Pharisees accused Jesus of being because he could cast out demons. For instance:

“The scribes who had come from Jerusalem said, ‘He is possessed by Beelzebul,’ and ‘By the prince of demons he drives out demons.’ – Mk 3:22

“This man drives out demons only by the power of Beelzebul, the prince of demons.” – Mt 12:24

Beelzebub and the Philistines

The name Ba’al-zebub is associated with the Philistine city of Ekron. In 2 Kings, after Moab rebelled against Israel, Ahaziah had fallen and injured himself. To find out if he’d recover from the injury he sent out messengers, telling them:
“Go and inquire of Baalzebub, the god of Ekron, whether I shall recover from this injury.” – 2 Kings 1:2
The Lord, however sent Elijah to intercept the messengers on their way to Ekron, asking them if they seek Baalzebub’s advice because there is no God of Israel and instructing them to return home and inform their master that he shall not recover.

Beelzebub as Lord of the Flies

Ba’alzebub’s name derives from the Canaanite “Baal” meaning “lord,” and he is known as the “lord of the flies”

Beelzebub in the Testament of Solomon

In the Testament of Solomon (1st-3rd centuries CE), Solomon learns that Beelzeboul is one of the fallen angels who destroys by means of tyrants, causes demons to be worshiped, arouses desires in priests, brings about jealousies and murders, and instigates wars. The other demon he refers to as being imprisoned in the Red Sea is the one-winged demon, Abezethibou, Moses’ adversary in Egypt.
“Then I summoned Beelzeboul to appear before me again. When he was seated, I thought it appropriate to ask him, ‘Why are you alone Prince of the Demons?’ He replied, ‘Because I am the only one left of the heavenly angels (who fell). I was the highest-ranking angel in heaven, the one called Beelzeboul. There is also accompanied me another ungodly (angel) whom God cut off and now, imprisoned here, he holds in his power the race of those bound by me in Tartarus. He is being nurtured in the Red Sea; when he is ready, he will come in triumph.”

“I said to him, ‘What are your activities?’ He replied, ‘I bring destruction by means of tyrants; I cause the demons to be worshiped alongside men; and I arouse desire in holy men and select priests. I bring about jealousies and murders in a country, and I instigate wars.” – TSol 6:1-4
Beelzeboul then prophecizes that the wind demon, Ephippas will bind the demon imprisoned in the Red Sea and bring him out of the abyss. He then tells Solomon that he is thwarted by the Almighty God and the oath “the Elo-i”.
“Then I said, ‘Tell me which angel thwarts you.’ ‘The Almighty God,’ he replied. ‘He is called by the Hebrews Patike, the one who descends from the heights’ he is (called) by the Greeks Emmanouel. I am always afraid of him, and trembling. If anyone adjures me with the oath (called) ‘the Elo-i’, a great name for his power, I disappear.” – TSol 6:8
Another manuscript (MS P) of the passage found includes the numeric sum of the name of God. The letters translate as follows. E = 5, m = 40, m = 40, a = 1, n = 50, o = 70, u = 400, e = 8, l = 30.
“I, said to him, ‘Tell me by what angel you are thwarted.’ And he replied, ‘By the holy and precious name of the almighty God, the one called by the Hebrews by a row of numbers, or which the sum is 644, and among the Greeks, it is Emmanouel. And if one of the Romans adjure me by the great name of power, Eleeth, I disappear. ” – TSol 6:8 MS P
Finally, Beelzeboul informs Solomon about heavenly things.
“Listen, King, if you burn oil of myrrh, frankincense, and bulbs of the sea along with spikenard and saffron, and light seven lamps during an earthquake, you will strengthen (your) house. And if, being ritually clean, you light (them) at the crack of dawn, just before the sun comes up, you will see the heavenly dragons and the way the wriggle along and pull the chariot of the sun.” – TSol 6:10-11

Beelzebub in the Gospel of Nicodemus

According to the apocryphal Gospel of Nicodemus (5th century CE), after Christ’s crucifixion, Satan/Beelzebub is depicted conversing with Hell about how he would now bring Christ down to Hades. While conversing, Christ frees Adam and those residing in Hades and then ascended with them into paradise. Hell then rebukes Satan:
“Then Hell, receiving Satan the prince, with sore reproach said unto him: O prince of perdition and chief of destruction, Beelzebub, the scorn of the angels and spitting of the righteous why wouldest thou do this? Thou wouldest crucify the King of glory and at his decease didst promise us great spoils of his death: like a fool thou knewest not what thou didst. For behold now, this Jesus putteth to flight by the brightness of his majesty all the darkness of death, and hath broken the strong depths of the prisons, and let out the prisoners and loosed them that were bound. And all that were sighing in our torments do rejoice against us, and at their prayers our dominions are vanquished and our realms conquered, and now no nation of men feareth us any more. And beside this, the dead which were never wont to be proud triumph over us, and the captives which never could be joyful do threaten us.

O prince Satan, father of all the wicked and ungodly and renegades wherefore wouldest thou do this? They that from the beginning until now have despaired of life and salvation-now is none of their wonted roarings heard, neither doth any groan from them sound in our ears, nor is there any sign of tears upon the face of any of them. O prince Satan, holder of the keys of hell, those thy riches which thou hadst gained by the tree of transgression and the losing of paradise, thou hast lost by the tree of the cross, and all thy gladness hath perished. When thou didst hang up Christ Jesus the King of glory thou wroughtest against thyself and against me. Henceforth thou shalt know what eternal torments and infinite pains thou art to suffer in my keeping for ever.

O prince Satan, author of death and head of all pride, thou oughtest first to have sought out matter of evil in this Jesus: Wherefore didst thou adventure without cause to crucify him unjustly against whom thou foundest no blame, and to bring into our realm the innocent and righteous one, and to lose the guilty and the ungodly and unrighteous of the whole world? And when Hell had spoken thus unto Satan the prince, then said the King of glory unto Hell: Satan the prince shall be in thy power unto all ages in the stead of Adam and his children, even those that are my righteous ones” – Gospel of Nicodemus VII (XXIII)

Belzebud: Also written frequently “Beelzebub”, “Baalzebub”, “Beelzebuth”, and “Beelzeboul”. From Hebrew, BOL, = Lord, and ZBVB,= Fly or Flies; Lord of Flies. Some derive the name from the Syriac “Beel d’Bobo,” = Master of Calumny, or nearly the same signification as the Greek word Diabolos, whence are derived the modern French and English “Diable” and “Devil”. 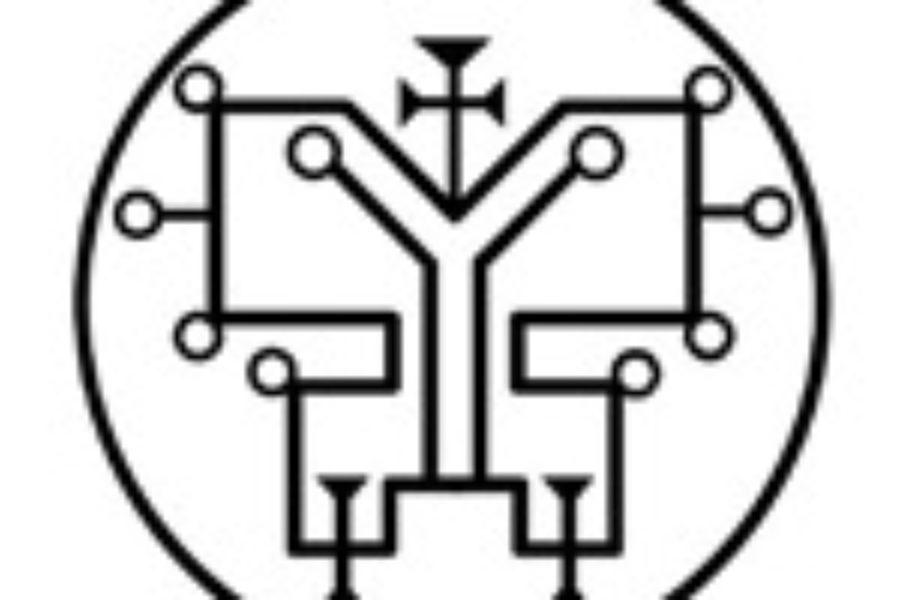