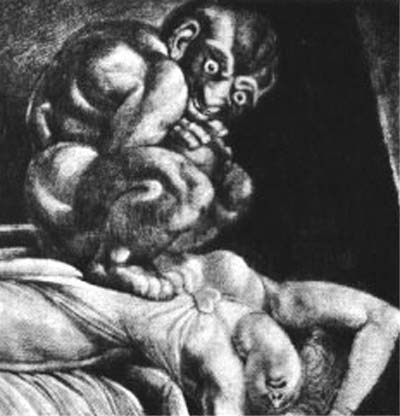 The incubus, also called “follet” in French, “alp” in German, “duende” in Spanish, and “folletto” in Italian, was an angel who fell because of lust for women according to many of the Church Fathers. This being appears to women often in the form of a sexual dream/nightmare, and in fact the Latin word for nightmare is “incubo”, meaning to lie upon. Its counterpart is the succubus, who appears to males. When a witch or sorcerer is associated with it, it is called a magistellus or familiar.

That fiend that goth a-night
Women full oft to guile,
Incubus is named by right;
And guileth men other while,
Succubus is that wight.
Guazzo described the incubus in his “compendium Maleficarum (1608)” as
The incubus] can assume either a male of a female shape; sometimes he appears as a full-grown man, sometimes as a satyr; and if it is a woman who has been received as a witch, he generally assumes the form of a rank goat.’
Incubus as Physical Beings
Sinistrari, a demonologist of the 17th century (d. 1701) explained how a spirit could become a body: as
If we seek to learn from the authorities how it is possible that the devil, who has no body, yet can perform actual coitus with a man or woman, they unanimously answer that the devil assumes the corpse of another human being, male or female as the case may be, or that, from the mixture of other materials, he shapes for himself a body, endowed with motion, by means of which body he copulates with the human being.’

Thomas Aquinas (1225-74) wrote:
Nevertheless, if sometimes children are born from intercourse with demons, this is not because of the semen emitted by them, or from the bodies they have assumed, but through the semen taken from some man for this purpose, seeing that the same demon who acts as a succubus for a man becomes an incubus for a woman.’ – “Summa Theologica”
Bonaventura (Cavalieri 1598 – 1647 maybe? reference?’) wrote
Devils in the form of women [succubi] yield to males and receive their semen; by cunning skill, the demons preserve its potency, and afterwards, with the permission of God, they become incubi and pour it out into female repositories.
Sinistrari also summarized two late 16th century writers, the Dominican Thomas Malvenda and Dr. Franciscus Valesius:
What incubi introduce into the womb is not any ordinary human semen in normal quantity, but abundant, very thick, very warm, rich in spirits and free from serosity. This, moreover, is an easy thing for them, since they merely have to choose ardent, robust men, whose semen is naturally very copious, and with whom the succubus has relations; and then the incubus copulates with women of a like constitution, taking care that both shall enjoy a more than normal orgasm, for the greater the venereal excitement the more abundant is the semen.
Incubus as Figments of the Imagination

Only by the 18th century did the hype die down and did physicians like Louis XV’s personal physician, De Saint Andre suggest that incubi were the result of the imagination:
The incubus is most frequently a chimera, which has no more basis than a dream, a perverted imagination, and very often the invention of a women… Trickery has no less a place in the history of the incubus. To conceal her sin, a woman, a girl, a nun in name only, a debauchee, who affects the appearance of virtue, will palm off her lover for an incubus spirit which haunts her.’ (“Lettres au sujet de la magie, de malefices et des sorciers, 1725)”)
Church’s View of Women

The Church was concerned with the nature of the women and as early as the late 15th century, there were three distinctions published in the “Malleus Maleficarum (1486)”

One account given by a priest said that:
In 1643 I was ordered by my ecclesiastical superiors to exorcise a young girl of twenty years of age, who was pursued by an incubus. She acknowledged without evasion everything this impure devil had done with her. But after what she told me, I came to the opinion that in spite of her denials she had given the demon some indirect encouragement. Indeed, she was always forewarned of his coming by a violent over-excitement of the sexual organs, and then, instead of having recourse to prayer, she ran straight to her room and threw herself on her bed. I tried to rouse in her some feeling of trust in God, but I did not succeed, and she seemed almost to be afraid of being delivered from the devil. (Delassus, “Les Incubes, 1897”)

Dictionnaire Infernal: An Encyclopedia of the Supernatural