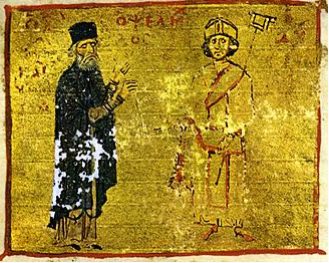 The main source for information about Michael Psellus’ life comes from his own works. His writing contains extensive information pertaining to his life. He had a vast political career, and he contributed in many aspects of science and mathematics.

His original name was Constantine Psellus. During the first half of his life, he is politically active. He was a secretary to a provincial judge, so he could help raise a dowry for his sister. Sadly, that all changed when his sister passed away. He gave up his position and resumed his studies. This lead him to meet some rather important people, including the later emperor Constantine X Doukas.

This eventually lead him to become a political adviser to emperor Constantine IX Monomachos. While at the same time, he was the leading professor at the University of Constantinople, as a “Chief of Philosophers.” During the end of Monomachos’ reign, Psellus decided to leave the political scene in search of religion. He entered the Olympus monastery.

Constantine gave up his worldly possession when entering the monastery, this included his name. However, he got to chose a new name for his rebirth into this religion. He chose Michael.

Despite this, he goes back on to the political scene after the Monomachos’ death. He stayed in politics for twenty years, until eventually he decides to resume his life in the monastery.

Psellus done many great things in his life, contributing to politics, mathematics, and science. However, we are primarily going to be concentrating on his work in demonology.

Michael Psellus contributed one well-known literary work  into the subject of demonology.

This well-known example of his work in demonology is De Operatione Daemonum, known as a classification of demons.  An excerpt from the book is as follows:

There were in all six species of demons, I know not whether subdividing the entire genus by their habit!, or by the degree of their attachment to bodies—be that as it may, he laid that the sexade [of demons] were corporeal and mundane, because in that number all corporeal circumstances are comprised, and agreeably to it the mundane system was constituted; afterwards he observed, that this first number [the sexade] was represented by the scalene triangle, for that beings of the divine and celestial order were represented by the equilateral triangle, as being consistent with itself, and with difficulty inclined to evil, whilst human beings were represented by the isosceles triangle, as being in some measure liable to error in their choice, yet capable of reformation on repentance.

It goes further in depth, speaking hypothetically over the existence of the unknown. It debates idly upon how demons operate, and the classification of them. This piece of literature provided much insight into the work of demons, helping the church and demonologists everywhere.