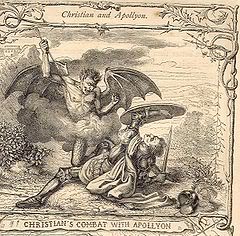 From the Hebrew root meaning ‘to destroy,’ Abaddon was known as a ‘place of destruction’ synonymous with Sheol in Prov 15:11; 27:20 and Job 26:6. It is the second of the seven names of the underworld in the Babylonian Talmud.

In Job 28:22, Abaddon is personified as a being that can speak and hear.

Abaddon and Death say,
‘With our ears we have heard a report of it.’

In Revelation, Abaddon is the King of the abyss who commands an army of locusts. He will rise up after the fifth angel has blown his trumpet.

They have as king over them, the angel of the abyss; his name in Hebrew is Abaddon, and in the Greek he has the name Apollyon. – Rev 9:11

The reference to the abyss in this case is the temporary place of punishment for the fallen angels in contrast to the lake of fire, which will be permanent.

Most authors thought of Abaddon as a place rather than an entity. For instance, in The Biblical Antiquities of Philo. When the years of the world (or age) are fulfilled, God will quicken the dead, and raise up from the earth them that sleep: Sheol will restore its debt, and Abaddon its deposit, and every man will be rewarded according to his works. – III. 10.

In Mather’s Key of Solomon, Abaddon is the name of God that Moses invokes to bring destructive rains. and by the Name ABADDON which Moses invoked and sprinkled the dust towards heaven, and immediately there fell so great rain upon the men, cattle, and flocks, that they all died.